Remembering the dead – an exhibition at Leeds Abbey House museum

Posted on April 6, 2018 by betterlivesleeds

What objects do you own that remind you of someone who had died?

This is the subject of a new exhibition, entitled Remembrance, at Abbey House Museum . The exhibition includes objects which have been used to remember loved ones since the Victorian period and up to the present day.

And as the Leeds Dying Matters event is more or less a month away for taking place at the Kirkgate Market event space on 15 May visiting this exhibition shows how important the event’s theme  – what can you do in your community? actually is.

The exhibition is curated by Patrick Bourne, Leeds Museums and Galleries, Jessica Hammett and Laura King, University of Leeds 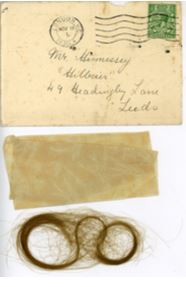 Some of these were mass produced, or reflect widespread mourning rituals and practices – such as the creation of a mourning card or brooch. But people have also created or kept individual and unique objects to remember loved ones.

The exhibition features some very unusual objects which were created to mark a death. And sometimes everyday objects take on a new meaning because of the memories attached to them. In the museum collections there are many objects that were kept for a long time before being donated because of their association with somebody that the donor was close to, who had passed away. These items were not made for mourning, but they took on added significance after the death of their original owner. 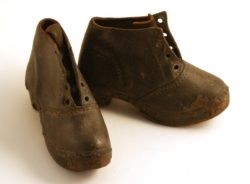 This everyday pair of children’s clogs were sent by relatives to a father whose wife had just had a baby boy. Sadly, the baby passed away before the clogs arrived and the mother died shortly afterwards. The father hung the clogs up on the back of his bedroom door by their laces, which were originally red. 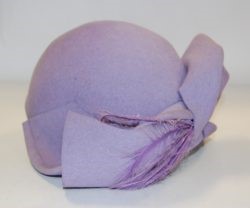 The lilac felt cloche hat with bow and feather trim was worn by Rosetta Rowley (1929 – 1953) when she was in her early twenties. During the day Rosetta worked in a factory making costume jewellery and in the evening she worked as a cinema usherette. In 1952, when she was 23 years old, she married Michael Noble. She died just one year later, after having been admitted to hospital with pneumonia when four months pregnant. Mrs Rowley kept her daughter’s beautiful clothes, initially intending her younger daughter Eileen Pugh to wear them when old enough. But Eileen never fit them and following her mother’s death in 1977 donated them to the museum. Five years after Rosetta’s death Michael remarried and joined the rest of his family in Australia. 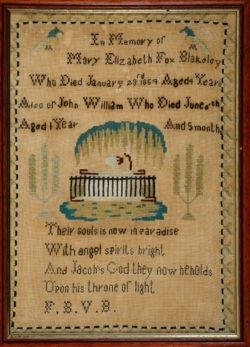 In the mid-nineteenth century, embroidery was thought to be an important skill for women and girls. It was a pastime, a housekeeping ritual, and it was thought to demonstrate virtue. The cross stitch samplers that were produced often had a religious or educational tone, and they were used to record births and commemorate deaths. This sampler is poignantly dedicated, ‘In memory of Mary Elizabeth Fox Blakely who died January 23rd 1854 aged 4 years. Also of John William who died June 6th aged 1 year and 5 months’.  It is initialled F.B.V.B. which stands for Fanny Blakeley Victoria Burnley (1839-1904), aunt to the two deceased children. 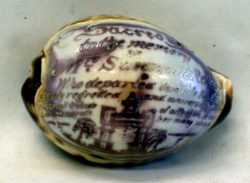 This polished shell bears the inscription: ‘Sacred to the memory of Mrs Susannah Releen who departed this life Sept. 8th 1854. Deeply regretted and universally lamented. This small tribute of affection is carved to commemorate her many virtues’. A unique item to remember by.

The exhibition also features stories of Leeds people today, from a Sikh mourning outfit to a model Gypsy hearse. Based on University of Leeds research, the museum collections and work with a number of community groups such as Leeds GATE, Sikh Elders, and Caring Together, it traces how people have used objects to remember over many decades.

Visit until December 2018, and add your own story to our remembrance book, postcard gallery, or slideshow of images.

This site uses Akismet to reduce spam. Learn how your comment data is processed.